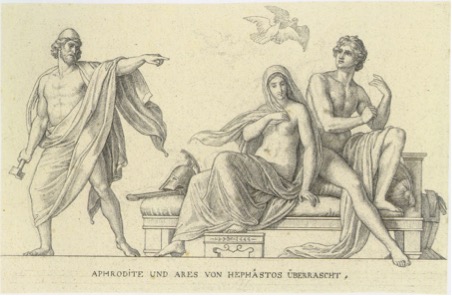 It should come as no surprise that Helios was the one who opened my eyes to my wife’s infidelity; he is after all, the Sun, and from him no sin finds refuge.

I already knew who he was; every Olympian deity knew. Ares was hot-blooded, passionate, and a master of war. He had testosterone in abundance, and my wife clearly noticed. I have seen the way she stole glances at him; something lights up her eyes that no amount of jewellery fashioned from precious metals can ever do.

While mortals cast their eyes on Mount Olympus and wish for lives like ours, I can only muster a chuckle. Shrouded in clouds, they know not what transpires upon these peaks, and they keep dreaming, whilst I look down from above, wondering if the pastures are greener without immortality gnawing at its blossoms.

I suppose I cannot be too surprised at my wife’s affair. Ares is not her first, neither will he be her last. We are like oil and water, albeit more literally in this context. I am the God of blacksmiths, metallurgy, fire, and volcanoes. My hands are coarse and grimy, caked in dirt from days at the forge. Crafting is all I know, and so to it my life is bound; it is all my life is good for. I was born lame and ugly, and I was a magnet for ridicule. Were it not for a wager with Mother, I might never have gotten a shot at divine love; though, on hindsight, that could have been a better alternative to my current situation.

My heart still skips a beat when I talk about Aphrodite. Born of the ocean, her beauty surpasses the seven seas, and her skin is smoother than gentle waves. Everywhere she walks, heads will turn. I still remember an episode when Hermes fell off his pegasus trying to catch a glimpse of her. Every deity, most of whom more handsome than I, vied for her heart. Imagine the shock when it was announced that I would take her hand in marriage — we were the original Beauty and the Beast, only that I was not a charming prince in disguise.

Things went south from day one, and I worked my fingers sore to win her heart with welded gifts. She loved them, only because she knew she would appear even more beautiful to Ares. Being a god does not exempt me from bitter emotions, but while I lament my fate, I too, submit to my lot in life. I pitched beyond what I was suited for, and here I am, contemplating my next move, knowing that somewhere in Ares’ grand palace, the woman I have given my heart to is having the time of her eternal life.

I already have the tool to catch them in the act — an unbreakable bronze net attached to the posts of our bed — yes, our bed that is no longer exclusive — because apparently, the one at the palace is insufficient, which really puzzles me, considering I am the one who makes all the divine mattresses. Perhaps she prefers the scent of volcanic ashes to the stench of blood. But, even if I were able to catch them, what can I do next? They will probably be shamed, but how will that ever heal my wounds? I know we are done, but can I really bring myself to divorce Aphrodite, the woman of my dreams? Mortals only ever listen to stories about our infamous rage. It runs in the family: my mother, Hera; my father, Zeus; their untameable rampages forever etched in the minds of their fearful worshippers.

But listen, gods cry and fall in love, too.

Aphrodite and Ares were eventually caught and shamed. Out of rage, Hephaestus demanded she returned every gift he had given her, but Poseidon, out of his own lustful motives, made Ares pay for the gifts, and should he fail, surrender Aphrodite to him. Ares eventually defaulted.

What of poor Hephaestus? He loved his wife so much that he dropped the divorce, leaving her free to continue her cheating ways. He eventually had several earthly and divine consorts, bearing deities in the process. One of whom was Palaemonius, who would later become one of Jason’s Argonauts. It seemed that in his consorts, Hephaestus finally found acceptance.

What boils in my literary cauldron today?

We all know sharing literature makes you look intellectual. Support your local storytellers. It's quite effortless.